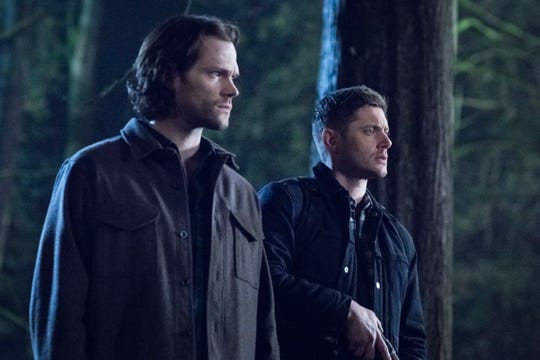 Sam Winchester (Jared Padalecki), left, and his brother, Dean (Jensen Ackles), are the central characters in CW’s long-running ‘Supernatural,’ which will end next year after its 15th season. (Photo: Dean Buscher, CW)

“Supernatural,” a CW hit that often seemed like it might run forever, will end next spring after its 15th season.

“We just told the crew that though we’re very, very excited about moving in to our 15th season, it will be our last. Fifteen years of a show that has certainly changed my life, I know it’s changed these two guys’ life,” Ackles, who plays Dean Winchester, said in the video. “And we just wanted you to hear from us that though we’re excited about next year, it will be the finale. The big, grand finale of an institution.”

A red-eyed Padalecki, who plays Dean’s brother, Sam, shared some emotion: “We’ve cried some tears and we’ll cry some more,” he said, before Ackles chimed in, “But we’re going to save the emotion for next season.”

More: CW’s ‘Arrow’ to end its run with shortened Season 8 this fall

He acknowledged that wouldn’t be easy, saying Padalecki is “hanging on for dear life.”

CW and Warner Bros. Television, which produces the series, confirmed Season 15 will be the last for the series, whose panels are an annual big event at San Diego’s Comic-Con.

Executive producers Robert Singer and Andrew Dabb also issued a statement regarding “Supernatural,” which was created by Eric Kripke.

“Firstly, we would like to thank all the people who have been involved with the show, both in front of and behind the camera. For us it has been an experience of a lifetime,” they wrote. “We’d like to give special thanks to Jensen, Jared and Misha for making this journey so special. It is now most important to us to give these characters that we love the sendoff they deserve.”

Season 15 of “Supernatural,” TV’s longest-running sci-fi genre show, will consist of 20 episodes, bringing the series total to 327. The show, which premiered in 2005, is the only series from the former WB network still on successor CW’s schedule.

Earlier this month, it was announced that another popular CW series, “Arrow,” would end after a 10-episode fall season.

‘The L Word: Generation Q’ review: Back in fine form

Long after most nations urged their citizens to wear masks, and after months of hand-wringing about the quality of the

This Time, Hardly Anyone Followed Trump’s Lead on Virus Drugs

Huge Crowds Around the Globe March in Solidarity Against Police Brutality

Huge Crowds Around the Globe March in Solidarity Against Police Brutality

Congress Can Still Save the Recovery

Pence tiptoes past Brexit tumult for an oh-so-chipper chat

An Awakening in Columbus, a Reckoning in Williamsburg

AEW aims for a 'Dynamite' wrestling revolution on TNT

Meet the high-flying, super-kicking performers of All Elite Wrestling, the upsta…

30 Of The Best “The Office” Quizzes Of The Decade